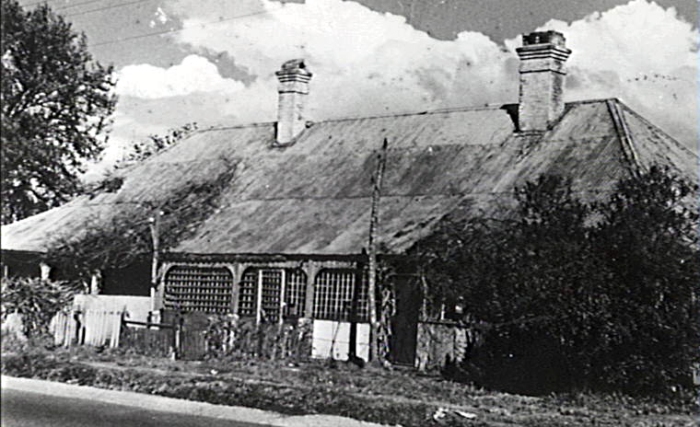 Lysaght’s inn, Fairy Meadow, the Illawarra’s first licensed pub north of Wollongong. This picture was taken shortly before its demolition to make was for Wollongong High School in the 1960s.

A magistrate, who resigned after a NSW Parliamentary inquiry found he called the Wollongong Police Sergeant an “old woman”, he wasn’t afraid to speak his mind – especially to the establishment.

Lysaght was granted 60 acres, where he built the Illawarra’s first pub north of Wollongong – The Fairy Meadow Hotel in 1856.

The pioneering publican hosted the inn, on the present southern corner of Lysaght Street and the Prince’s Highway, for 13 years before becoming a Wollongong magistrate in 1870.

Senior Sergeant Sheriden brought charges against Lysaght for influencing the outcome of a court case and slandering his name in August 1876.

The local police had a confrontation with a group of coal miners resulting in allegations they had used undue force and cruelty.

Lysaght was said to have sided with the miners, criticising the police and some of his fellow magistrates, although the police were eventually cleared of all the accusations.

A Government inquiry into Sheriden’s charges sat at Wollongong for three days, hearing evidence from 25 witnesses. The hearing came to the conclusion that some of the allegations were proven against the colourful publican. He resigned as magistrate and became host of the Queens Hotel overlooking Market Square, Wollongong in 1876.

Born in Wollongong to Patrick and Johanna Lysaght in 1832, he was likely introduced to the hotel industry by his pioneering maternal uncles – publicans Edward and Alexander Elliott, who established and operated several inns in the region during the 1830s and 40s.

Lysaght became the first president of the South Coast Licensed Victuallers Association, the forerunner of the Hotels Association, in 1882, and soon turned his hand to politics.

During a temperance lecture by reformed drunkard, come teetotaler, George Perry in 1884, Lysaght – a candidate for the seat of Illawarra in the colonial government elections – came under some heavy criticism. He had recently sold the license of the Queens Hotel at Market Square and was attempting to re-open his old Fairy Meadow coaching inn. 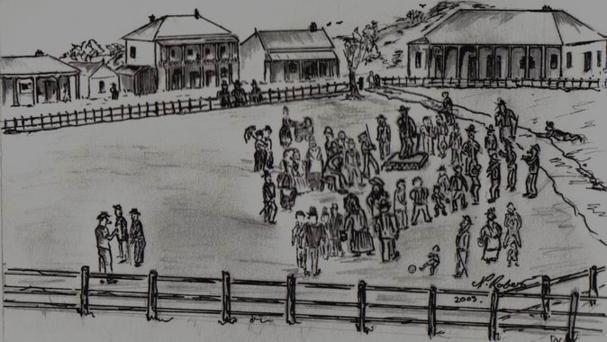 An artist’s impression of Perry’s temperance lecture at Market Square in 1884. Local publicans, including Lysaght, can be seen looking from in front of the Queens Hotel, the two storey building on the left. The former single storey Wollongong Hotel can be seen on the right. Picture by Neville Roberts

Several hundred people gathered around a park bench in Market Square, where Perry stood on a Sunday afternoon in June 1884, to hear a proposal to enter a temperance man to oppose Lysaght and sitting member for Illawarra and NSW Premier, Alexander Stuart at the 1885 election.

The teetotalers were pushing for local option polls that would allow voters a say on permitting hotel licenses within their neighbourhoods.

Wollongong’s hotelkeepers, including Lysaght, watched-on as Perry gave his lecture at Market Square, after hearing of his reputation for attacking publicans.

Perry’s reputation was proven correct. He demanded that Lysaght’s application for a hotel license at Fairy Meadow should be refused.

Perry said he had heard and read a great deal of Lysaght before he came to the district, and, on his last visit, made his acquaintance. He believed Lysaght was a good fellow, and he entertained the highest regard for him personally – it was the trade of public house keeping that he detested. He would rather see Lysaght on the bench of magistrates than in a public house, he told the crowd.

With the towering figure of Lysaght listening attentively, a crowd gathered, as confrontation was assured.

The reformed drunkard warned Lysaght that if he wished to become the Member of Parliament for Illawarra he should not re-enter the business of hotel keeper: “If he got a license again, and put up as a candidate for Parliament, the electors would say ‘Oh, it’s only Andy, that keeps the pub,’ and he would get very little support.”

Lysaght responded: “Never mind; I can say to the electors, what you are not able to say – that I never was under the influence of drink in my life.”

“I know that,” Perry replied, “I am given to understand that it is a fact Mr Lysaght never was intoxicated in his life. Unfortunately, I was; but thank God; I am a total abstainer now.”

Good gestured banter continued between the hopeful politician and the lecturer, with Lysaght quipping that he would have liked to have had the lecturer as a customer during Perry’s 19 years as a drunkard, as he would have made him wealthy.

Another publican, John Brennan of the Hibernian Hotel in Crown Street, asked Perry why was liquor so “un-Christian” if Christ turned water into wine? Firmly with tongue in cheek, Perry shouted back that maybe Jesus Christ was the first brewer of non-alcoholic wine.

The gathering and exchanges were lively, amusing, though good natured, and would have been an entertaining afternoon for the folk of Wollongong.

Perry’s temperance man did not materialise as a candidate, nor did the sitting member, Stuart, and, to the disappointment of the temperance movement, the race for the seat of Illawarra was contested by two high profile businessmen involved in the liquor industry.

In what was probably a wise move, Lysaght did not open his Fairy Meadow inn, and won the 1885 election from his opponent, William Wiley, an alderman on the Wollongong Borough Council, who happened to have an application pending to construct a 40 room tourist hotel in upper Crown Street.

Lysaght died in 1906 and was buried in the old Roman Catholic cemetery where almost a century later controversy erupted over the development of the Five Islands Brewery and bar. But that’s an entirely different story, and one I’m sure Lysaght would have been happily to have debated. It seems somehow appropriate that a public bar now overlooks a pioneering publican’s last resting place.

Despite such a prominent figure, I have been unable to locate an image of Andrew Lysaght. I would appreciate any assistance locating a picture of the pioneering publican.

Sister Pubs: A history of the Bellambi Hotel, Bellambi and the Heritage Hotel, Bulli

Sister Pubs, a 55 page book, measuring 20x25cms (8×10 inches), with plenty of rare historic images (colour and black & white), also features a list of all the publicans and entertaining and amusing stories and reminiscences.

Only available in Australia

One thought on “Lysaght and the reformed drunkard”

SADLY now confined to the pages of history, the International Hotel was located in Niagara-street, Armidale, NSW. During the 1920s the freehold of the pub was owned by William Joseph Doyle. Arthur William Chapman was licensee when the hotel was… Read More ›