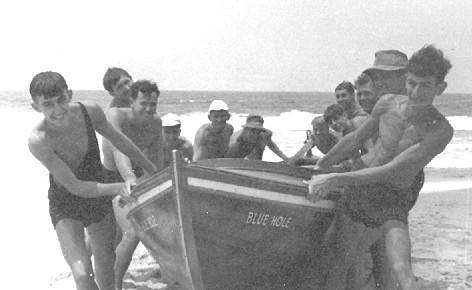 In the 1940s a surf club was formed at Era with their rescue boat christianed after the original Blue Hole boat. The members of the surf club included Peter Howe (front left) and Tony Piccinelli (front right).

SECRETLY perched overlooking the ocean in the Royal National Park are around 200 historic shacks forgotten in time.

Built between 1910 and 1950, before the area was included into the Royal National Park, the shacks evolved on land leased from freeholders.

Material for the jerry built shacks and, the owners’ provisions, were, and still are, carried about two kms along steep bush tracks at places known as Era, Burning Palms and Bulgo.

The heritage listed communities are the largest remaining group of coastal shacks in Australia and are accessible only by foot or boat.

One of the most interesting of these communities is Era where the unemployed of the Great Depression formed, to help feed their families, a fishing club known as the Blue Hole Boat Club.

With the coal mines retrenching hundreds of employees and forcing many families into shanty towns, the close knit communities of the far northern suburbs pulled together. On the eve of the Great Depression a Bulli Shire Council health inspector’s report reveals the terrible living conditions these people endured.

Families squatted in primitive huts along the banks of creeks at Coledale with one family, two grown men, one woman, and nine children living in two rooms and a closed verandah. The inspector noted four girls and the parents slept in one room and five boys in another.

Unemployment was rife in the district in 1934 and those without permanent work had to find other forms of accommodation. A reported 3,000 people in the Illawarra lived in “various types of temporary shelters, without adequate water or sanitary provisions”.

Unemployed camps sprang-up at Slacky Flat Bulli, Coledale and Helensburgh as the coal mines and other industries laid-off workers. Rabbiting and fishing became a necessary past time to survive.

Helensburgh, with a population of around 2000, was hard hit by the Great Depression. Most men worked in the Metropolitan Colliery and by the early 1930s most had been retrenched.

One of these men was Jim Barnett who, to feed his family, camped in a tent at Era in the late 1920s.

Then known as Blue Hole, Jim built a small shack out of timber and iron, with a bush kitchen constructed from turpentine bark in 1932 as he became a frequent visitor to Era in search of food for his wife and three children.

A shanty town developed with many Helensburgh families finding Blue Hole the ideal place to find a feed of leather jacket or flathead. The regular anglers at Blue Hole decided on an ingenious method of feeding Helensburgh’s struggling unemployed while providing a moral boosting social outlet.

The Blue Hole Boat Club was formed in January 1934 to purchase a 16-foot double ended timber boat. Members paid a six pence entrance fee and were levied fees to maintain the vessel. The clinker built boat was purchased from Balmain and carted to Helensburgh for 14 pounds.

Helen Voysey, who presently owns one of the historic shacks at Era, recently came into possession of a tattered blue exercise book revealing in typical copperplate writing of the time the minutes of the Blue Hole Boat Club.

The president of the club was Ben Jones, the vice president Fred Gray; T Lenthall was treasurer and HE Gray secretary. One of the foundation members was Jim Barnett, who with other members such as Tony Piccinelli and Peter Howe, would distribute the fish caught from the boat to members in front of the old Helensburgh Workmen’s Club.

Euchre competitions and dances, with Artie Birch entertaining on piano, were held at the Empire Theatre and Helensburgh Band Hall to raise funds.

The Blue Hole, as it was christened, was housed in a boat shed at Era and the club strictly forbid camping inside. The boat reel was kept in a box on the beach.

Today the foundations are the only physical reminder of the Blue Hole Boat Club. With the welcomed end of the depression, the club disbanded and Helensburgh people continued using the shacks at Era as weekenders.

Names such as Bill Shadlow, Andrew Freebairn, Don Hendry, Doug Howe and, of course, Jim Barnett, upgraded their shacks often taking their families to Era for weeks on end during the Christmas holidays.

The Blue Hole tradition continues today with descendents of those families maintaining the shacks and leasing their “weekenders” from the National Parks and Wildlife Service.

One thought on “The Blue Hole Surf Club”