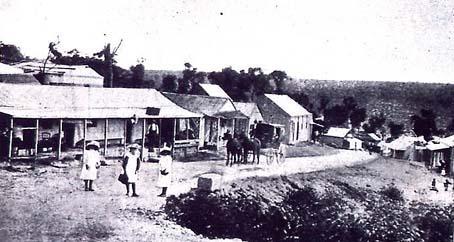 WORK on constructing the Cataract Dam, 10kms west of Bulli, was well underway to supply water to a thirsty Sydney in 1905.

A temporary township, with a daily garbage collection service and environmental safeguards well ahead of its time, Cataract City was home to hundreds of dam construction workers and their families from 1902, until the dam’s completion in 1907.

Cataract City was a bustling community of navvies, labourers, engineers office workers and their families, living in white-washed tenements, corrugated iron barracks and boarding houses not far from what was at the time Australia’s largest engineering project. With them of course followed enterprising business people, such as butchers and grocers.

Cataract Dam, completed at a cost of $1.3 million in April 1907, was at the time Australia’s first large water supply dam.
The drought of 1901-1902 brought Sydney perilously close to a complete water famine and after two Royal Commissions into the lack of a descent water supply for Australia’s largest city; a decision was made to dam the Cataract River. 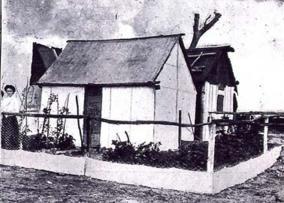 A typical tenement at cataract.

For the first time in Australia, pre-cast moulded concrete blocks were used in construction for the upstream face of the dam. They were hauled to the site from an open factory on the banks of the Loddon River, at Bulli Tops while cement and other supplies were delivered to the site by steam tractors hauling trailer trains, over rough-made roads from Campbelltown, about 16 kms away.

The building of the Cataract Dam had an enormous social and economical impact on both the Illawarra and Macarthur regions.

At its peak in about 1904, Cataract City had a population of around 1000 people. It had a main road one chain wide with business offices, married and bachelor quarters, post office, three general stores, seven boarding houses, butchers, billiard saloon, private assembly hall, and a public school with 100 students, together with an Anglican and Catholic church.

The single workmen lived in an iron barracks, four of which accommodated 40 men each, and three others housing 24 men respectively. They were supplied with spring stretcher beds, basins and tubs for washing clothes. Town residents lived in small tenements.

The Sydney Mail reported in March 1905: “Whenever navies or miners camp in numbers, away from ordinary conveniences, it is well-known that typhoid or other epidemics break out”.

Responsible for the health and hygiene of Cataract City’s residents was 62-year-old Dr Vandeleur Kelly.
An Irishman, Dr Kelly studied medicine in Edinburgh and worked as a dispensary medical officer for six months in Glasgow Scotland and four years in Ireland.

In 1889 Kelly and his wife migrated to Sydney, where he established a city practice and for nearly five years was an ‘outdoor’ surgeon to Sydney Hospital, working regularly for the government medical officer, Dr Paton. He was commissioned as a partially paid surgeon captain in the military forces of NSW in 1889 and promoted surgeon major in 1896.

Kelly was a founder of the St John Ambulance Association in NSW in 1890 and later a Knight of Grace of the Order which he served strenuously all his life.

A temporary railway line was built to help build the dam

In April 1894 he delivered a paper on army ambulance organisation to the United Service Institution of NSW, proposing recruitment of a special force from civilian ambulance services, including surgeons, nurses and stretcher-bearers equipped with sprung, mule-drawn, covered wagons like ‘those used carrying grand pianos’ and independent of Army Service Corps transport.

The Sydney Mail reported that Dr Kelly had made sanitary science a specialty, and knew “prevention is better than cure”.

Cleanliness was insisted upon in Cataract City, “with the result that dirt is conspicuously absent, and not even a scrap of paper is to be seen about the streets or works. The dry earth sanitary pans are used, and big iron bins are freely distributed, into which all rubbish and house-waste must be placed. These receptacles are daily removed and emptied a long distance from the catchment area.”

While Dr Kelly was in charge of Cataract City no epidemic broke out, the only cases that kept him busy, according to the Sydney Mail, were colds and accidents.

A colleague at the time described him as “a witty Irishman” with a “taste in literature”, and “a gentlemanly, kindly figure-head [who] really knew nothing of actual management”.

Dr Kelly, who had a medical practice at Auburn, died of a stroke at Balmoral in 1913. Survived by his wife and their son and daughter, he was buried in the Anglican section of Thirlmere cemetery.

On completion of the dam in 1907, Cataract City was dismantled and the once busy streets have been today reclaimed by ‘the bush’.