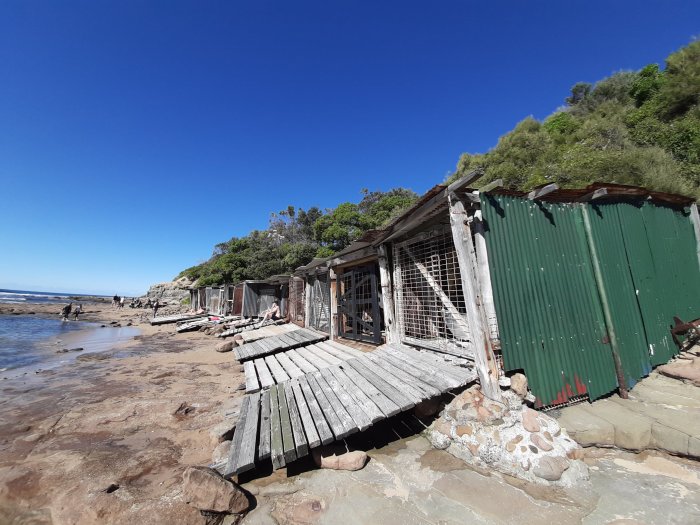 The Sandon Point Boat Sheds, June 2016 after they were battered by king tides. Photo: Tony Roberts

FOR over 120 years the boat sheds at Sandon Point, Bulli have provided a place for anglers to store their vessels.

This is the story of fishing at Sandon Point and the boat sheds that have remarkably survived countless storms, fires, and government regulations.

The Sandon Point sheds are all that remain of the corrugated iron and timber structures that were once common on the northern beaches of Wollongong. The sheds sat on the sheltered northern side of headlands at Stanwell Park, Coledale, Austinmer, Waniora Point (Bulli), Woonona and Bellambi.

Fishing developed from purely a recreational pastime into an essential activity at Bulli with the onslaught of the 1890s economic depression.

From the earliest days of settlement, Europeans, like the Aboriginal people they displaced, took advantage of the abundant sea life off the Illawarra’s coastline.

The Sydney Evening News reported on Monday August 9 1897 that “a few residents” have formed fishing clubs, and “possess their own boats”.

From about this time the first boat sheds were constructed in the shadow of the Bulli Colliery’s sea jetty. They, like now, were always at the mercy of Mother Nature. The Illawarra Mercury reported on Tuesday 15 February 1898:

The Gale at Bulli

The gale of Saturday and Sunday, and also the severe rainfall experienced during those days, has proved disastrous to farmers, orchardists and others about Bulli and district. Corn has been levelled, and crops flooded to such an extent as to utterly ruin them. The Bulli Jetty again came out second best in the encounter, half the structure, together with 29 trucks loaded with coal, steam boiler, and tramline machinery, being swept away. The loss is a severe one. The waves reached the company’s boat-shed at Bulli jetty, damaging the structure and also the boat to a considerable extent. The creeks are all in a state of flood.

Fishermen gathered around one of the Sandon Point Boat Sheds early last century.

The Sydney Evening News reported in January 1899 that “good hauls of fish are being made just now, both by boat and surf-fishing”.

The newspaper reported that there were three boats available – two belonging to syndicates of miners, who “spend their time on the water when the colliery is idle” – while the third shed was more then likely owned by local businessman, Jacob Glass.

Fishing became so popular by the turn of the century Jacob Glass, with others, started an annual fishing competition.

The Sydney Morning Herald reported on December 23 1903 that a “curious competition was held recently at Bulli, and caused a considerable amount of excitement locally”.

The newspaper revealed the fishing contest was between fishing boats, and lasted from 6am until midday. The competition attracted over 12 boats in 1907, and continued for many years under the leadership of Jacob Glass, from the boat sheds at Sandon Point.

When Bulli’s main employer, the colliery, was idle as a result of industrial disputes, or simply because of an over production of coal, the miners often fed their families from the ocean. 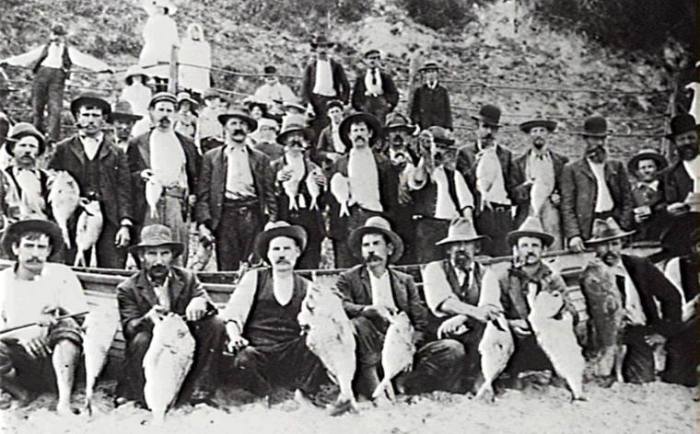 Fishermen at Sandon Point, more than likely gathered around Jacob Glass’ boat. Jacob Glass is pictured sitting at the front, third from right.

Being invited onto a boat crew was considered a great privilege. My late grandfather, Jim ‘Double’ Orvad, born in Bulli in 1907, often dropped a line from the old Bulli jetty, and on occasions was part of Jacob Glass’ boating crew. He told the story of how when returning to shore after a successful day on the ocean, Glass would divvy the crews’ catch on the rocks in front of the boat sheds. His usual practice while dividing the catch was accompanied with the line: “One for you, one for me, and one for the boat”.

From the turn of last century, the original boat shed owners paid an annual rent to the owner of the Bulli Colliery, George Adams. In the early 1940s, a rental of six shillings a year was paid for each shed to Australian Iron & Steel, who had purchased the colliery from Adams.

When the Bulli Colliery ceased shipping coal from the jetty in 1943, the responsibility for the boat sheds was handed over to the Bulli Shire Council, which continued charging the owners of six shillings annually through to the late 1940s. Council charged 10 shillings for similar sheds at Austinmer. 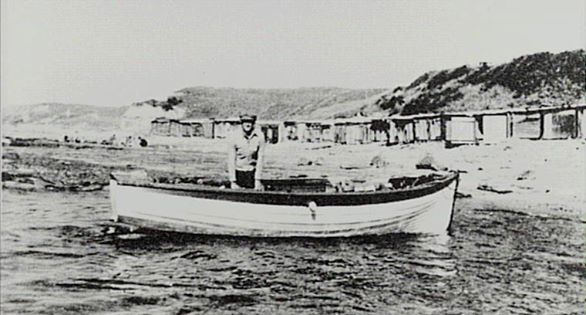 Raymond Bourke with his fishing boat at the Sandon Point Boat Sheds in “Gwythers’ Channel” in the 1950s.

Bulli’s early angling families continued the tradition of having the privilege of housing a boat in Wollongong’s only remaining beachside boatsheds at Sandon Point. Families such the Rixons, Nicklins, Hobbs, Fritz, Haberleys, Chilbys, Taylors, Johnsons, Orvads, Glasses, Critchers, Gwythers, Bourkes and many more have fished either from boats housed in the sheds, the jetty, or from the coastline. 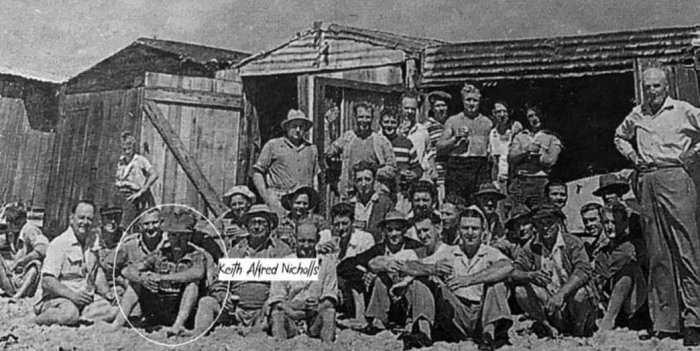 Jack Gwyther was the publican of the Bulli Family Hotel during the 1950s. He was an avid fisherman who kept his boat in one of the sheds at Sandon Point.

The late George Channell, a regular at the Family Hotel during the 1950s and 60s, told me before his death that he remembered Gwyther’s boat shed, which didn’t have easy access to the original boat launch channel through the rock shelf.

In the 1950s he had a new channel blasted out of the rocks in front of his shed, which sat a little west of the main launch channel, and became known as ‘Gwyther’s Channel’.

Gwyther’s customers, the miners, provided nobles from the Bulli Colliery, to blast out the channel. The miners for their efforts were in return given a nine gallon keg of beer.

The channel can still be seen just west of the main deep launch channel. There are no boat sheds in its vicinity today.

An aerial view of Sandon Point, showing the boat sheds in 2016. 1: The remaining boat sheds. 2: where the boat sheds once stood. 3: Gwyther’s Channel. 4: the original channel, still used today. 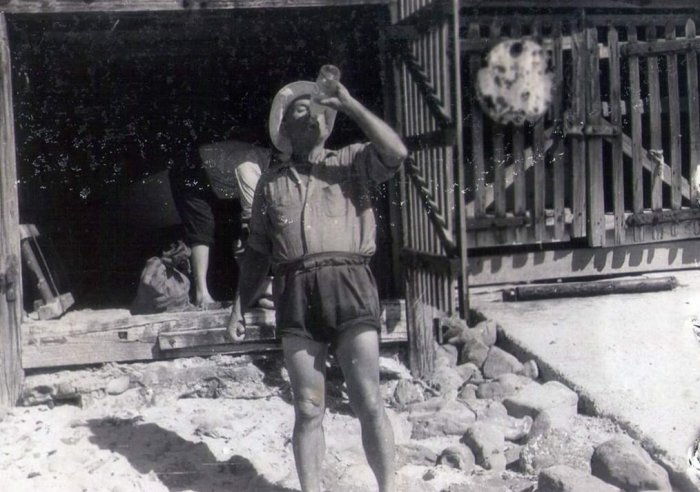 The few remaining sheds have become a much-loved feature of Sandon Point, often photographed, and a treasured part of Bulli’s history.

5 thoughts on “The Bulli Boat Sheds”

SADLY now confined to the pages of history, the International Hotel was located in Niagara-street, Armidale, NSW. During the 1920s the freehold of the pub was owned by William Joseph Doyle. Arthur William Chapman was licensee when the hotel was… Read More ›