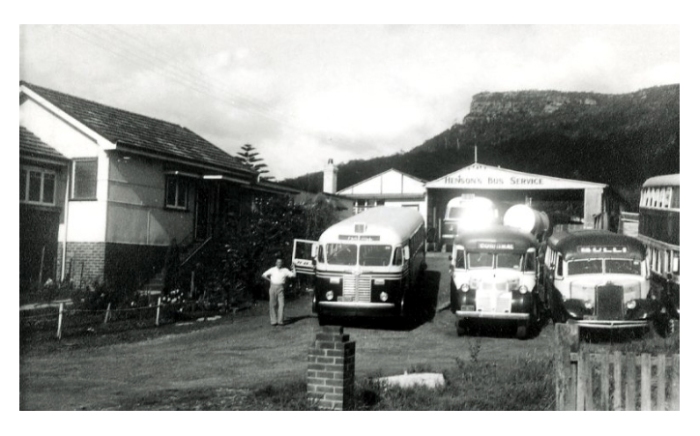 Henson’s Bus Service, Corrimal, has been attending to the majority of the transport needs of that centre for over 20 years.

Today a modern fleet of buses service the area from a large depot situated in the heart of the town.

Principal of the company is Mr. Harry Henson (pictured), who arrived at Corrimal over 40 years ago.

A miner he took up employment at the South Bulli Mine and later at Coalcliff and Scarborough mines.

Mr. Henson has also been a keen gardener and for some years competed at district horticultural shows, annexing many prizes. He also took a big interest in the Corrimal Agricultural Bureau and can claim to be the first secretary. The bureau, a big success, was of considerable help to the numerous members.

In 1924, Mr. Henson commenced a transport business and secured the Royal Mail contract. Two years later he put into operation a hire car plying between the town and Railway Station. In 1930 he entered into the bus business and six years later organised the Bus Owners Association. Of this movement he was appointed secretary treasurer holding office for 11 years.

Mr. Henson carried on the bus run for 19 rears, but now with the assistance from his sons, has incorporated it into a company known as Hensons Bus Service Pty Ltd. He was not idle during the war years and was the assistant secretary of the Comforts Fund and also District Traffic Officer for Evacuation.

The Henson family is well known along the Coast and consisted of two daughters and five sons. The family was unfortunate to lose one of its members, Corporal James Henson in Thailand. Mr. Henson has always been a great follower of sport.

An enthusiastic soccer fan, along with the late Mr. George Murrell, he formed a new soccer club at Corrimal, the Corrimal Thistles, which won honours during its first year of activity. His ambition was filled when he visited the International game England v Scotland at Wembley Stadium in 1949. He considers it an honour to he chosen the first patron of the Illawarra District Soccer Association, also patron and life member of the Corrimal Rangers. Since 1937, he has travelled approximately 80,000 miles in Australia and overseas.

* Henson’s Bus Company operated from 1929 to 1959, and in later years was managed by Harry’s son, Abe Henson. The company was sold to Hill’s Bus Service, later known as John J. Hill Buses, and now Premier Illawarra bus service. Henson’s Bus Depot was located at 36 Migley Street, Corrimal. For a history of Hill’s buses see: ‘On the buses’ at Looking Back.