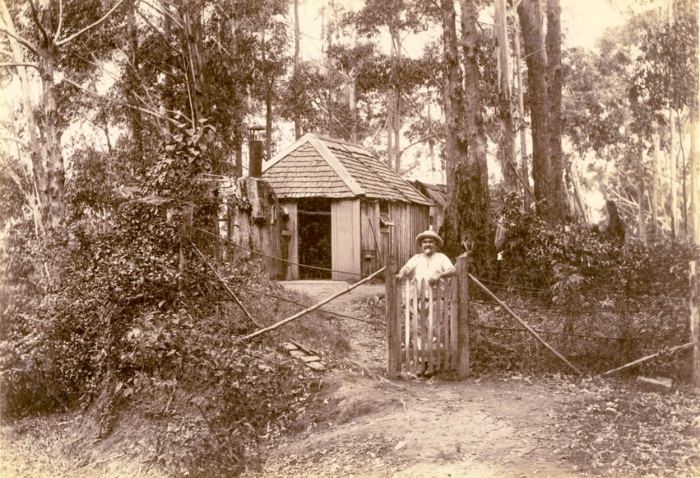 Louis Scieroni at the gate of his hut on Bulli Pass. Picture: NSW State Library

CONFUSION has grown as to the identity of the man in this photograph. This is Louis Scieroni, who after almost 20 years resigned his position as the Bulli Pass maintenance man and abandoned his little hut in the scrub above Green’s Pinch in 1897.

History hasn’t been kind to Louie – as I’ll call him in this story. It’s uncertain just who employed Louie to keep the Pass up to scratch. Maybe it was the NSW Government, maybe it was subscriptions from the good folk of Bulli. We’ll probably never know. But whatever the case, he was respected and well-known during his time on the Pass.

His little hut, just on the rise above Green’s Pinch, was a popular tourist stop on the climb or descent of Bulli Pass, and as a consequence Louie became quite a celebrity. He was often photographed, and many images of him and his hut survive to this day.

Louis Scieroni (right) chats with a traveller at his hut on Bulli Pass. The picture, I believe has been incorrectly marked “Mr. Darcy…” Picture: Wollongong City Library

As time can sometimes do, Louie lost his true identity, and has been incorrectly captioned in many old photographs as “Lewis Darcy”or “Louis Darcy”.

This is incorrect. The caption on these photographs should read, Louis Scieroni.

The confusion stems from another ‘hermit’ who lived on Bulli Pass. His name was “Mr Darcy”and he lived further up on the summit of the Pass. Over time he has been confused with Louis Scieroni. As far as I can gather there are no surviving photographs of Darcy, the hermit of Bulli Pass.

The Illawarra Historical Society was presented with a collection of manuscript material compiled by the late Mrs. E. Dollahan, daughter of Bulli pioneer, Mary Darcy.

Mary Darcy, with her husband Laurence, were hosts of the Railway Hotel, where Louis Scieroni was given a ‘send-off’party when he left Australia to return to Europe in 1897. As far as I can gather there is no connection between the Railway Hotel publicans and the hermit on Bulli Pass with the name of Darcy.

Here is a portion of the manuscript, published in the lllawarra Historical Society Bulletin in March, 1975, about ‘The two hermits of Bulli Pass’:

One man, who lived the life of a recluse on top of the Bulli Mountain, was known as Mr. Darcy. He lived in a hut with a garden and rockery, composed of native plants and shrubs, which was the picture of neatness. The hermit lived in this isolated place until his death. None knew where he came from – he was a mystery to the district. He never left his camp, except when he required provisions, or to collect his mail at Bulli Post Office, when he would walk down the mountain and return on foot. He was hospitable to visitors and would show them around his camp, but made no permanent friends. All sorts of rumours were current about him. He was evidently an educated man. Some said he was a priest, some that he had been disappointed in love, some that he had an illicit still up behind the mountain. Whatever or whoever he was, he kept to himself, but was well liked in the district. He died in Bulli Hospital. 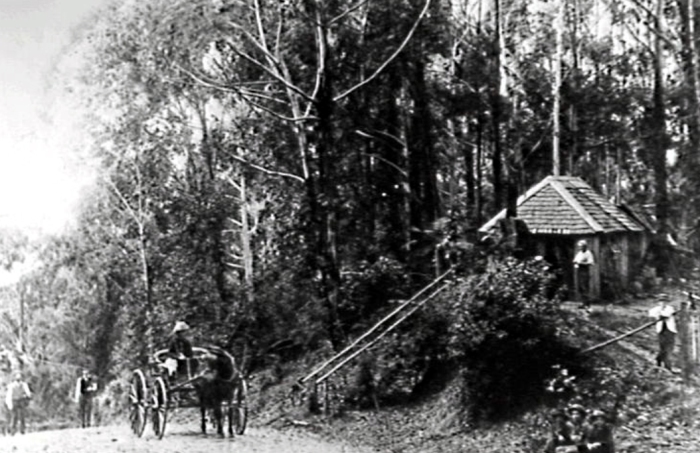 In contrast, Louis Scieroni, who lived further down the Pass, was a much more social bloke. Mrs. Dollahan continued her memories:

Another identity of early Bulli Pass days was known as ‘Louie’. He also lived a hermit’s life, but off the Pass road about halfway up. He was a Frenchman by birth and spoke broken English. He carved and sold whip handles. I remember the thrill, when I drove up the pass with my father of calling at Louie’s hut. He had all sorts of curiosities – snakes, frogs and insects preserved in bottles and would bring them out to show my father…

Louie seems to have made the Pass his home in the early 1880s. One of the earliest reference to him was published in the Australian Town and Country Journal on May 30 1885:

Some distance up a homestead is passed, prettily embowered in the luxuriant forest growth of the mountain’s side. Before long another residence is passed, and about half way up an original, structure is encountered, situated by the bend of the road. It is occupied by the road mender, who is a character in his way, and is ready to impart any information that he may possess. His hut is constructed of slabs with a shingle roof, and the owner has ingeniously contrived to utilise a hollow tree as a chimney. He also makes a good display of his household utensils outside, having his frying pan, billies, and pannikins hung up outside the hut, evidently as ornaments. The appearance of the place, half hidden as it is by huge trees and thick bush, serves to convey to the onlooker the thought that the owner has been striving to emulate Defoe’s hero in his household arrangements. Just past here we have a peep through the trees at the scenery of the country below, and some idea is afforded us of the magnificent panorama obtainable upon our reaching the summit. 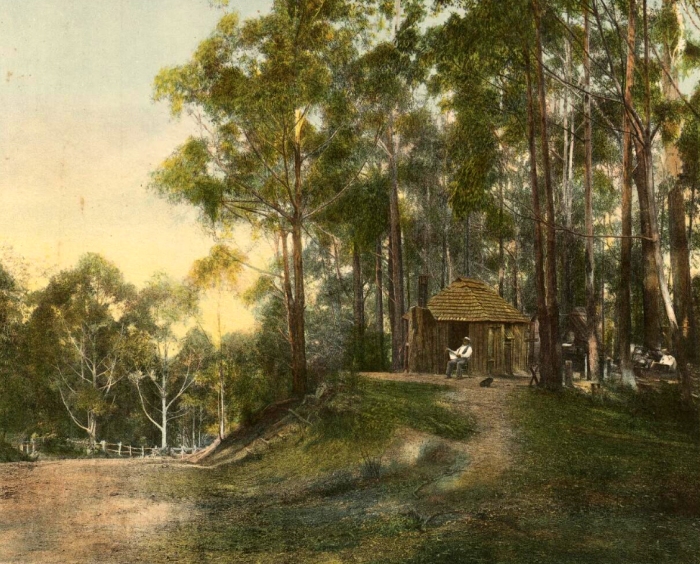 The area where Louis Scieroni had his hut on Bulli Pass today. The hut would have been on the right towards the highest part of the rise. Picture: Google Streetview

Seven years later, an artist visiting the Pass also recorded an encounter with Louie. The Australian Town and Country Journal reported on January 23 1892:

As I sketched his hut he came out, so I put in his figure, and afterwards went down and had a pleasant chat with him. He was full of his great theme, his visit to Europe during the Paris Exhibition, showed his views of Paris, graphically narrated his experiences, and told of the contrast between things as they are and as they were when he left home as a boy.

The Australian Town and Country Journal’s correspondent again recorded a meeting with “Old Louis” on March 13 1897:

Not far from the foot of the Pass, and situated in a gully, are two mammoth trees, which visitors rarely neglect seeing. A little beyond these is the tunnel of the ‘B’ Pit, and the quaint little hut occupied by the maintenance man, “Old Louis,” as he is locally known, and who for eighteen years has resided there alone. A native of France, he is in variably courteous, and, in cases of accident, or whether deluged with questions by tourists, he is invaluable.

Louie was well respected not only by the travelling public, but also the people of Bulli. When he decided to return to his homeland of either France or Switzerland the citizens of Bulli put together a farewell dinner for him. The valedictory was given at Bulli’s Railway Hotel, an old timber two storey pub that once sat on the highway opposite Hobart Street. The Illawarra Mercury April 3 1897:

On Saturday night last there was a representative gathering of townspeople at D’Arcy’s Railway Hotel for the purpose of making a presentation to Louis Scaroni [sic], on the eve of his departure for Switzerland, in recognition of his service on the Bulli Pass road during the past 19 years. Mr. H. S. Fry occupied the chair, and M. Nicholson, M.P., the vice-chair. The chairman, in presenting the guest of the evening with a gold watch chain pendent, dwelt at considerable length upon the commendable conduct of Mr. Scaroni during his sojourn in the district and wished him bon voyage to his native land. The pendent bore the following inscription:- ‘A token of regard from the people of Bulli to Louis Scaroni on leaving New South Wales’. The recipient briefly thanked those present for the kindness and for the token of their esteem. During the evening Mr. Scaroni was also presented with a travelling bag and a smoking cap. The banquet was pronounced one of the most successful that has ever been held at Bulli.

Louie, it seems, never immediately returned to Europe. His return home was delayed when he was robbed of his belongings and money in Sydney. Mrs. Dollahan continued her memories of Louie:

He once set out to return to France, but was robbed at the Sydney hotel where he was staying while waiting to board the boat. He returned to Bulli Pass and remained for a few years more; then, when he had sufficient funds, again decided to go home to open a restaurant in Paris, to cater for tourists, with a sign, “English Spoken Here”. He nearly lost his money again. At the hotel at the foot of Bulli Pass, where he spent the night, he was in a very excited state, with everyone shaking his hand and wishing him luck. Next morning he went to the station. The maid, cleaning out the bedroom, found the bag of money under his pillow. My father took a horse tied outside and raced to the station, reaching it as the train was puffing at the platform. Louie was a most pleased and subdued man to receive the bag -I think it contained £160 – which he had carelessly left under his pillow in his excitement on returning to his beloved Paris.

The Mercury reported on November 15 1898 that Louie returned “to the colonies by the ‘Friederich-der-Grosse’ last week from a lengthy absence in his native country.”

While that ends the account of Louis Scieroni, it leaves the question of who was the second ‘hermit’ of Bulli Pass. Just who was Mr. Darcy, the hermit who lived at the summit of Bulli Pass in his hut with a garden and rockery, composed of native plants and shrubs, which was the picture of neatness”? Back to the research….