The club under construction

ALTHOUGH Helensburgh Tradies Club began operating on shaky grounds, and has relocated to a new site, it has survived to become the Illawarra’s oldest operating registered club.

Born from a dispute with the town’s two publicans over beer prices, the Helensburgh and Lilyvale Workmen’s Club was established by a group of coal miners in 1896.

Complying with requests from the village’s two hotel-keepers, the scheduled opening was under threat when two of the State’s largest brewers, Tooth and Company and Toohey’s Limited refused to supply the club with beer. William Hanley, host of the Centennial Hotel, was tied to the Tooth’s Brewery, while George Welch, host of the Paragon Hotel, was under lease to Toohey’s.

A sympathetic brewery was most likely found through the efforts of another liquor dealer in Helensburgh at the time, David Craig. He was a foundation member of the club who ran a wine saloon and barber shop, and his contacts in the liquor industry may have helped broker a deal with Marshall Brothers Brewery on the corner of Oxford and Dowling Streets in Paddington.

Marshall’s beers, brewed since 1857, were a favourite in Sydney until Tooth’s brewery purchased and closed the company in 1911. The beer arrived by rail and it is said the first casks were carried in a steel-wheeled barrow from the old Helensburgh Railway Station to the clubhouse by six members working in relays.

Born at Spring Hill, near Wollongong, David Craig was in his early 20s when he moved to Clifton to work in the newly opened Clifton Colliery in about 1880. He married Jean, the daughter of Charles Harper, the day before Christmas of 1888, four months after her father’s death in an accident at the newly opened Helensburgh Colliery.

The early years of their married life were spent at Clifton where David worked as a barber and miner. He moved to Helensburgh with his wife Jean in the early 1890s to find work in Metropolitan Colliery.

By the turn of the century, besides working in the mine, he owned and operated two businesses in Helensburgh – a barber shop in Parkes Street and a wine saloon in Walker Street.
As he was a barber, it is likely his wife Jean was hosted the wine saloon which was licensed in 1896 and traded until 1903. 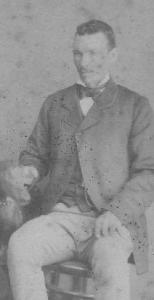 A meeting by a group of mineworkers in “Davie Craig’s Barber Shop” on November 4 1896 resolved that the “The Helensburgh and Lilyvale Workman’s Club and Mutual School of Arts be formed”.

A small weatherboard cottage in Walker Street was occupied on November 7 1896 where the first Annual General Meeting was held the following Monday.
David was a foundation member and was no doubt on hand when that first cask arrived for the opening ceremony.

Rousing cheers greeted the arrival of the cask to the clubhouse where it was mounted on a table and served to over 100 members by the steward Tom Coulson.

The need for a new clubhouse was met in 1898 when a tender for £1000 was accepted to build new premises beside the original small cottage. The club boasted a few hundred members by this time and the shaky start was soon put behind them.

Tooths, the State’s largest brewery were eventually won over, and by 1903 their beer was the favoured beverage of members of the Helensburgh Workmen’s Club. Other beer sold at the club included Kings, Cornwells, McEwans, Colonial, Australian, Addams XXXX and Reschs.

It was at their family home in Parkes Street that David and Jean reared their family of three sons and three daughters. David died on February 9 1930 aged 70, one of Helensburgh’s oldest and most respected residents. Jean died on December 12 1943 aged 82 and both were buried in the Presbyterian Cemetery at Helensburgh.

Footnote: After enjoying decades of profitable business in Walker Street, club management decided to sell and relocate operations to a purpose-built $5.5 million premises in Boomerang Street Helensburgh in 2008. Although the old Workers Club building was said to be not architecturally significant, local residents were dismayed that a beloved part of the town’s history was torn down and replaced with a block of residential units. The new club, with a new name, took a few years to be accepted by the locals, but now seems to have found its feet. Today it is known as the Helensburgh Tradies Club.

2 thoughts on “A working man’s club”

By MICK ROBERTS © THERE were plenty of pleasurable pubs to visit and review on our 145km road trip south from Cairns to Feluga late last year. There’s the pub in the sugarcane-fields at Garradunga, said to be haunted by… Read More ›