Ice cream, that delightfully pure food so smooth in texture and rich in cream – the story of Streets Ice Cream is that of one man’s determination to make a product as perfect as humably possible. 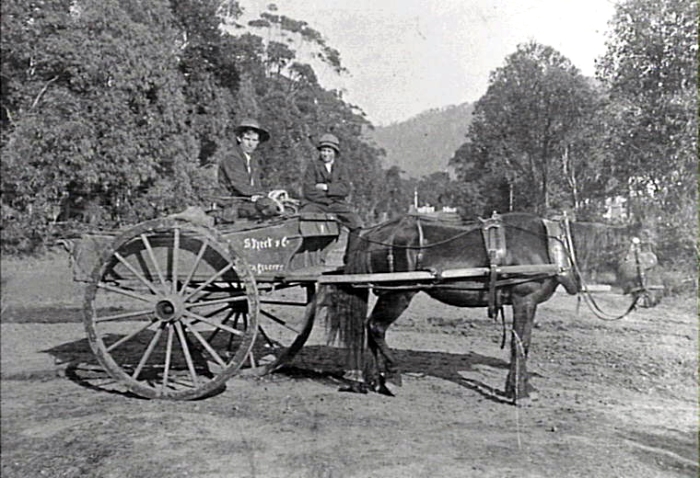 Edwin Street (left) sitting on the “Street and Company” delivery waggon in Corrimal.

The Street family grew vegetables on their five acre block of land in Collins Street, Corrimal, prior to establishing one of Australia’s best known ice cream companies.

In 1920, Edwin Street had a small shop in Corrimal, just north of one of Australia’s richest dairying districts. Lush grass and good dairy cattle will of course result in rich milk and cream.

Mr Street decided to use this local milk and cream to make ice cream for sale in his own shop. Starting small, production was by no means of a hand-operated churn. His ice cream soon became popular in Corrimal so he began receiving requests for his delicious product from other shopkeepers in the town. 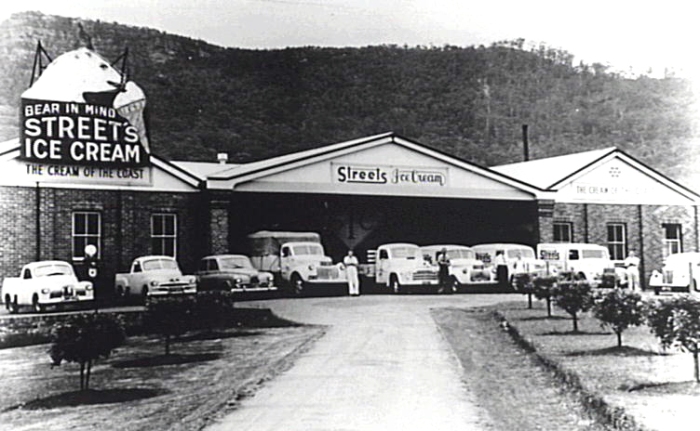 The Streets Ice Cream factory at the southern corner of Tarrawana Road and Princes Highway, Corrimal in the 1950s. 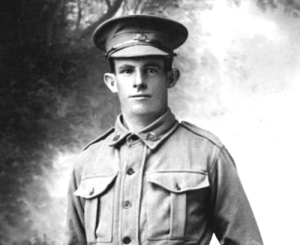 Edwin decided to extend his operations and in conjuction with his brother, Daniel Street, was delivering to an increasing number of shops in the district. Ice cream manufacture was carried on in collaboration with an ice works, which Mr Street also operated at the corner of Tarrawana Road and the Princes Highway, Corrimal.

Streets Ice Cream began to sell in Sydney suburban shops early in 1939. At first it was delivered by van from Corrimal, but with further growth, it was necessary to establish a depot at Bexley for storage and distribution to Sydney shops.

Continual expansion of Streets Ice Cream, then manufactured only at Corrimal, necessitated extension of premises and plant.

So, in 1947, a large new factory was built at Turrella – a Sydney suburb. This factory was equipped with the most modern ice cream making machinery obtainable. 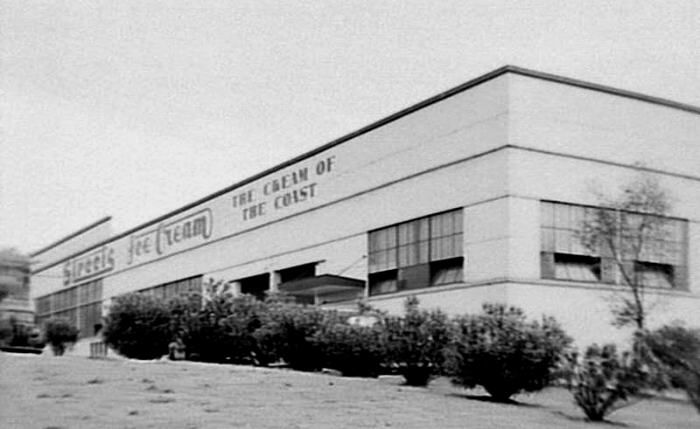 The Turrella factory in the early 1950s.

The fresh, rich cream and milk from the best dairy herds of the South Coast of NSW were delivered daily to both Corrimal and Turrella factories. Modern manufacturing equipment ensured the purity, smoothness and delicious flavour of the finished product.

In addition to the fleet of cream coloured refrigerated trucks, which delivered throughout the city, suburbs and South Coast, the ice cream was packed in insulated canvas shippers and transported hundreds of miles into the country by rail.

Streets Ice Cream is proud to acclaim its product, “The Cream of the Coast.” 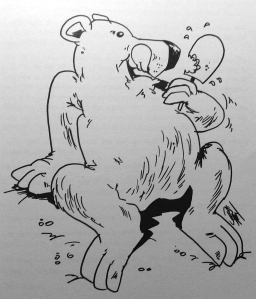 I remember travelling from Port Kembla on a Dion’s bus, as a child, and whenever we came closer to Corrimal and the Streets Ice Cream factory, all of us kids would jump the aisle, to the western side of the bus, if we weren’t already strategically seated, to get the best view of “the bear”. For anyone who doesn’t know or remember the fabulous sign of the neon bear licking the ice cream, it was an incredible sight for locals and travellers going through town. The bear seemed almost larger than the factory itself, his head moved back and forth, and his red tongue flashed out to lick the ice cream – Jenny Kuemmel.

3 thoughts on “Corrimal’s ‘Cream of the Coast’”