THE late Peter Chamberlain had vivid memories of his dad telling him yarns about working on the Bulli Jetty.

I interviewed Peter, who lived with his wife Bronwen on Bulli Hill, back in the 1990s. He sadly died in 2019.

Peter told me about his father George, and Grandfather, Arthur Chamberlain, who both earned a living as bridge and wharf contractors, moving around the country in search of work early last century.

George was born in Richmond Victoria in 1893, the first child of Arthur and Isabella Chamberlain and was destined to follow in his father’s foot steps.

Peter said his grandfather, Arthur worked on Australian icons such as the Circular Quay wharves and Sydney Harbour Bridge. His grandfather’s first visit to the Illawarra was when he supervised the construction of a jetty at Port Kembla in about 1907. Later he was awarded the contract as supervising foreman to repair and extend the Bulli Coal Company’s jetty at Sandon Point in 1912.

Nineteen-year-old George and his 16-year-old brother Neild helped their father on the 18 month repair project.

The 800 feet long jetty was constantly at the mercy of the elements and had been rebuilt only five years earlier after 260 feet collapsed after a storm.

The Chamberlain family packed up and moved from Sydney into a small cottage at the Sandon Point in 1912, Peter Chamberlain said.

“There were two little cottages close to each other that were back along the railway line from the jetty. About where the Sandon Point Community Picket is now located,” he said.

“The cottage they stayed in was very, very old even at that time.”

Young George was gaining quite a reputation as an accomplished diver and was employed to recover piers and other remains of the jetty that had fell into the ocean after a storm.

Peter said his dad often told the tale of the ‘sleeping sharks” when remembering working on the jetty.

“There were quite a few of what they called sleeping sharks laying on the bottom of the ocean around the jetty,” he said.

Arthur Chamberlain being helped into a diving suit

“The motionless sharks looked very much like the large jetty piers in the murky depths and often dad would mistakenly go to grab a shark thinking it was a pier,” he said.

“Fortunately he was never attacked.”

Arthur was promised 15 weeks extra pay if he completed the work on time but due to foul weather the contract went overtime.

“The mine manager, a Mr Broadhead, recommended grandfather be paid the 15 weeks bonus despite not completing the repairs on time because of bad weather – and he got it too,” Peter said.

In 1916 George signed up to fight in the Great War at the age of 23 later seeing action in France. After the war he worked as a diver for the Cornish Salvage Company recovering sunken vessels in Wales. On one dive he was caught under a vessel and slowly was pushed into the mud. In desperation he shut off his air escape valve causing the suit to swell with air. When the suit became largely inflated he hit the exhaust fan allowing enough room to escape certain death.

“Dad often said that was the narrowest squeak he had ever experienced,” Peter said.

After his return to Australia, the Chamberlains moved to Redhead on the NSW South Coast where George married a Milton dressmaker by the name of Elsie Ottway in 1922.

Peter said his mum and dad only had a short six years together. Birthing complications caused his mum’s death three months after he was born in 1927.

George remarried in 1932 and with his new wife, Phyllis they bought the Popular Café on the corner of Lawrence Hargrave Drive and McCauley St Thirroul.

“The shop was very hard work, off to the markets at 4 o’clock to buy the fruit and vegetables,” Peter remembered. The shop also stocked fine china such as Royal Doulton and gained an excellent reputation for meals.

George became president of the Thirroul Progress Association and in later years worked for his sister, Rube Hargrave and her husband Jack, maintaining their property assets such as the Sublime Point Kiosk.

In a strange twist the Chamberlain men, who spent most of their working lives together, died in the same year. George (61), his brother Neild (57) and father Arthur (85) all died in 1954. 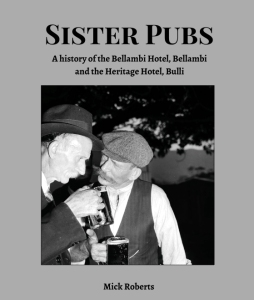 Sister Pubs: A history of the Bellambi Hotel, Bellambi and the Heritage Hotel, Bulli

Sister Pubs, a 55 page book, measuring 20x25cms (8×10 inches), with plenty of rare historic images (colour and black & white), also features a list of all the publicans and entertaining and amusing stories and reminiscences.

Only available in Australia

One thought on “The Chamberlains and the Bulli jetty”

NOW a popular pub in the Perth inner city suburb of Highgate, the Brisbane Hotel has traded for over 120 years. The pub, located at the corner of Brisbane and Beaufort Streets, was established in 1898. In recent years, the… Read More ›